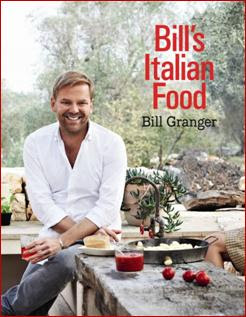 Bill Granger is a restaurateur and self-taught cook whose relaxed and joyful approach to food is an essential element of his enduring popularity. Born in Melbourne into a family of butchers and bakers, Bill moved to Sydney when he was nineteen. There he opened his first restaurant, bills, at the age of 22 and now has three restaurants in Sydney, four in Japan and one in London. This year will see the opening of Bill’s second restaurant in London and first in Hawaii. Bill regularly contributes to national magazines and newspapers and his television series have been viewed in 30 countries worldwide. Bill is based in Sydney and London with his wife and three daughters. Bill’s Italian Food is his eleventh cookbook.

With more than 100 original recipes,Bill’s Italian Food takes inspiration from the diversity of Italian regional food to make the most of fresh seasonal produce. Concentrating on simple, flavoursome dishes with short ingredient lists and uncomplicated methods, the recipes in this book are divided by solution-driven chapters that embody Bill’s casual cooking and his spirit of generosity and sharing — approaches that perfectly reflect the Italian lifestyle.

Bill says, ‘As our pace of life gets ever faster and cooking for friends and family takes on the same hectic anxiety, why is it that a holiday in Italy sends me home optimistic, revitalised and striving to be a ‘little bit more Italian’? It can’t be simply the great coffee (although that’s certainly revitalising), the crisp pizza and fritto misto, or the antipasto platters shared under wide blue skies... There is something about the joyfully uncompromising Italian lifestyle, the stubborn refusal to hurry (over lunch, or to catch the autobus), and the sacrosanct importance of sitting down to dine with family that I always resolve to bring home to my kitchen. (And, of course, the golden rule of travel applies: never mention politics, money or sport. Stick to food — in Italy it’s always a winner.)’

Thanks to Harper Collins Publishers Australia, The Food Mentalist has two copies of Bill's new cookbook 'Bill's Italian Food' to giveaway, valued at $49.99 each. To enter, simply leave a comment below (in 25 words or less) telling us what your favourite Italian dish is to prepare and why. ( Open to Australian residents only). Please make sure you leave a valid email address so you can be notified if you win. Entries close Friday 13 September @ Midnight EST.

Featured below are two of the recipes featured in Bill's Italian Food - Classic baked ricotta cheesecake and Fresh pan fried snapper with capers and lemon.

Preheat the oven to 180°C. Lightly grease a
23cm springform cake tin and line with baking
paper. Put the amaretti and digestive biscuits in a
large sealable bag and crush with a rolling pin until
fine crumbs. Tip into a bowl, add the butter and
mix until all the crumbs are coated. Transfer to the
prepared tin and spread evenly over the base. Bake
for 10 minutes. Remove from the oven and allow
to cool. Reduce the oven temperature to 160°C.

To make the filling, lightly beat the eggs and sugar
until the sugar has dissolved. Add the ricotta,
mascarpone, flour and lemon zest and squeeze
of juice and continue beating until well combined.

Pour the filling over the biscuit base. Bake for
45 minutes, or until just set with a slight wobble in
the middle. Switch off the oven, open the door a
little and leave the cheesecake to cool completely.
Spoon strawberries over the top before serving.
SERVES 8–10

Heat 1 tablespoon of the olive oil in a large nonstick
frying pan over medium heat. Season the
snapper with sea salt and freshly ground black
pepper and cook, skin side down, for 2–3 minutes,
until the skin is crisp and golden. Turn over and
cook for a further minute then remove to a platter
and keep warm.

Return the pan to the heat, turn up the temperature
and heat the remaining oil. Tip in the capers, garlic
and lemon slices and sizzle until the capers burst
open and look crisp. Spoon over the snapper and
serve with green bean and little gem salad. SERVES 4