Happy Cider Sunday! This week I would like to introduce you all to guest blogger James Adams, a cider enthusiast who reviews cider on his blog All About Cider. James has published articles for Beer & Brewer Magazine and was selected as a cider judge at this year's Melbourne Fine Food Awards.

In this week's post James provides us with a great introduction to the world of French cider and the 'controlled designation of origin' (AOC) which is essentially a French government certification granted to particular regions of France for cider, wine, cheese and other artisan food related products. It often indicates a certain level of quality. 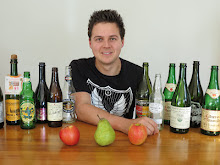 When it comes to cider, there’s no bigger name in the business than Eric Borderlet. One of my cider making heroes, Eric makes fine boutique champagne styled syders/siders on his 15 acre organically farmed property in the commune of Charchigné, southern Normandy. The soil composition of granite bedrock, combined with silt and clay is in Eric’s eyes perfect for fruit growing. Following strict bio-dynamic and dry farming practices, Eric’s property boasts twenty varieties of heirloom apples, and fifteen pear varieties. His Poire Granit offering is produced with pear trees believed to be up to three hundred years old, which really is astounding.  His philosophies are that of purity and honesty, and these really shine though into the Eric Borderlet range. 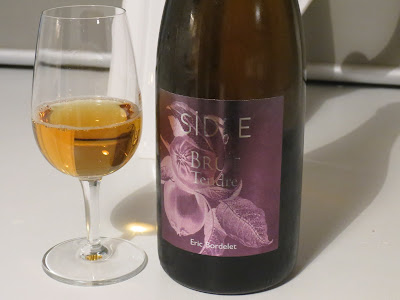 Norman cider is split into AOC zones (Appellation d’Origine Contrôleé), with AOC Cidre du Pays d’Auge being the most notable and biggest region. AOC zones help maintain quality and integrity of a product by setting strict growing and production guidelines. Pays d’Auge cider commonly comes in the form of Cidre Bouche, which loosely translates to cider under cork. The ciders produced can vary between alcohol and turbidity levels, but all share the same traditional elements. They are made using traditional French heirloom apples and pears, picked and pressed by hand and fermented naturally in oak vats. Domfrontais, the region where Eric Borderlet’s orchards lie, is also an AOC zone. Pear, or Poire cider falls under the AOC appellation of Pears of Domfront. Regulations strictly outline that pear must be present in a cider blend, and an orchard must contain at least fifteen per cent pear trees.

French cider is not only made in the region of Normandy. Brittany which lies to the west of Normandy also produces fine farmhouse ciders. Like Normandy, Brittany also holds specific AOC zones, with AOC Cornouaille being the most prominent. Breton cider is characterised by being traditionally very rustic, unpolished and confronting with higher sugars and lower alcohols. But the delicacy and unexpected finesse of Breton cider, makes them perfect to drink as an aperitif, or with food such as crepes.

So now with the knowledge of Norman and Breton cider fresh in our minds, it’s time to review an example - the 2008 Eric Borderlet - Brut Tendre pétillant-naturel. This cider retails for approximately $20 a bottle, and is easily and readily available in Australia – vintage may vary. 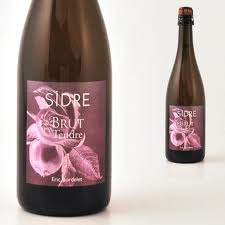 On pouring, the cider forms a nice foamy mousse conforming into a soft and elegant bead. The colour shines a brilliant deep golden, with just a slight turbid haze. The nose displays lovely fresh upfront cider apples, apple skin, honey, caramel and soapiness. Earthy notes from the pears combined with subtle hints of dusty oak round out the nose perfectly, offering refined rusticity. The simplicity of this nose is rich and powerful. The beautiful primary fruit characters combined with secondary notes show such marvellous purity and balance.

A graceful up front, off dry sweetness adds essential mouth feel and weight to the front to mid palate. The sweetness is perfectly balanced with notable tartness from  acid apples used in the blend. Flavours of very ripe cider apples provide a beautiful depth of flavour and finesse. Soft and delicate tannins add texture, and towards the back palate a distinct minerality coats the sides of the mouth, along with persistent bitterness. The soft, natural carbonation adds excitement and another dimension of excitement. The palate is beautifully soft and delicate with delicious fruit characters.

This is a beautifully refreshing, elegant and refined cider perfect to drink as an aperitif or with food.