Haigh’s Chocolates is Australia’s oldest family-owned chocolatier having opened back in 1915. The Company manufactures its products in Adelaide and has several stores in Victoria, NSW and SA.  John  Haigh the current chairman studied at Lindt and Sprungli in Switzerland in the 1950’s and is responsible for incorporating the traditions of European chocolate making into Haigh’s operations.
Haigh’s are famous for their chocolate frogs, apricot fruits , Shiraz truffles in which they use wines from the regions in Adelaide and their Australian Collection which feature flavours like honey and macadamia, lemon myrtle, wattle seed and quandong. YUM!
I was walking along George Street in Sydney the other day and came across the Haigh’s store in the Strand Arcade and being the chocoholic that I am I just had to stop in and take a look. Pete and I  visited the Original Haigh’s store in Adelaide last year, but we didn’t purchase anything because at the time, chocolate and I were taking a break. A 3 month break to be precise. It was a trying time indeed but I survived and managed to come out on the other side a few kilos lighter and more in control of my chocolate loving ways. My days of inhaling an entire block of chocolate were behind me. I am now able to savour chocolate without having to eat it all at once! *Ahem* , I digress.
So, I walked in to the Haigh’s store in Sydney and was greeted by heavenly visions of chocolate, I was surrounded by blocks, bars, handmade gourmet delights , chocolate covered nuts and more. My olfactory system went into overdrive as I was embraced by the sweetness in the air.
One of the very friendly staff approached me and asked if I required assistance. Perhaps by  twirling and skipping through the store I had brought some unnecessary attention upon myself. I told her that I wanted to try their most unusual chocolate. I wanted something other than a block to challenge my palate. It was at that moment that I was introduced to Haigh’s Berry Chocs. I was told they were strawberry and raspberry flavoured centres dipped in white chocolate then dipped in milk ( for the strawberry) and dark chocolate ( for the raspberry). Yep, thank you very much, SOLD! 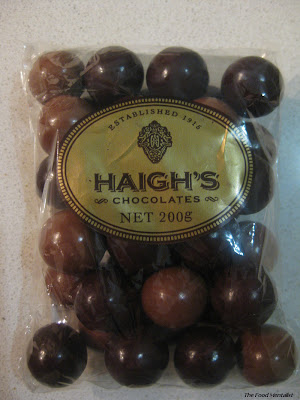 On the way to the counter I also picked up a dark chocolate block with candied orange pieces throughout. It instantly reminded me of Valhrona’s Manjari Orange which I bought in France and fell in love with. Even though we had to purchase an extra bag to travel home with ( most of which was full of various French and English chocolates) I wish I had bought more of the Manjari Orange. I am hoping that the Haigh’s dark orange block can fill the void. I have yet to try it but will keep you updated, I don’t expect it to be long :)
The Berry Chocs were delightful! I was very impressed and so to was Pete and Girlfriday.
First impressions were good, both the milk and dark chocs have a nice smooth shiny coating of chocolate on the outside. We bit into the first few to discover their makeup, this is what we found:
Tell me, what is one of your favourite chocolates?
Email Post
Labels: BERRY CHOCS CHOCOLATE DARK CHOCOLATE GODIVA HAIGH'S CHOCOLATES MILK CHOCOLATE VALHRONA WHITE CHOCOLATE